Wrestling with two mistresses is hard

When Steve challenges two mistresses to wrestle, he didn't know they were Jennifer and Kasie. He was surprised to find they were excellent at wrestling and putting men in choke holds. As they wore him out, they told him how pathetic he was. After that, they took greater pleasure in pulling his hair and making him beg for mercy. He learns that women are brutal mistresses and take pleasure in putting him to sleep 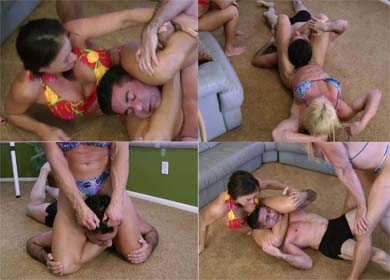