Mistresses use saliva and cigarettes to get info

Lady Betty and her friend Julie wanted to extract some information from this guy. They forced the loser to open his mouth and they spat into it. He had no choice but to swallow the saliva. He was tied up and the more he did not do as he was ordered, the worse they made his punishment. They even smoked and blew the smoke in his face. He gave them the info they wanted.

Mistress tramples slave to teach him how to behave

When it comes to teaching losers how to behave, this mistress has no equal. She knows how to punish them and to make them do what she wants. She customizes her punishments to them and makes them respond to her. She does not have a one size fits all punishment because it is not effective. This slave was not hardcore so she did not spend a lot of time and energy humiliating him. She just trampled him with her boots and it worked.

Princess Morgana likes to spit on guys for fun. She loves to tease them and make them believe she is having fun with them when in fact she is taking advantage of them. Many of them never see it coming until she has left them humiliated. She got this guy to believe that she has a fetish for spit. She got him to lick her spit and lick it before she left him tied up and walked away.

This mistress found out that her slave was not being honest with her. She had specifically told him to never be dishonest. She ordered shoes online and when they arrived, her slave brought them to her. She wore them and she used them to humiliate him. She crushed him using those shoes and watched as he cred and begged for mercy. She told him that was the price of dishonesty.

Mistresses punish guy for being rude to old couple

Mistress Gaia and her friend facesat on this guy as punishment. They caught him being rude to the old couple in their block and that did not sit down well with them. They had to do something about it so they crushed him with their asses and crushed his balls using their high heels. He had to beg for mercy and promise he would apologize and he would never do it again.

Mistress Emily Jones is naughty and she loves it. She enjoys using her naughtiness to make guys agree to have nasty things done to them. They think they are pleasing her and turning her on when in fact she is only having at their expense. She likes to tease them as well and make them do the naughty and degrading things to themselves. Most of them can never resist her.

Mistress Amina punishes slave and has fun at the same time

Mistress Amina was in a good mood when her slave messed up. She did not want him to spoil her good mood so she chose to both have fun and punish him at the same time. She danced on top of him as she trampled and smothered him. She made him cry and scream in pain but that did not stop her. She sent her message to him and he got it loud and clear. 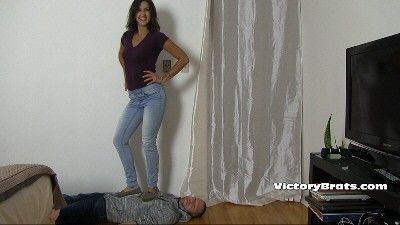 Mistress finds scapegoat to use in torturing slave

This mistress felt like punishing this loser but he had not done anything wrong to her. Still she had to punish him so the best way for her was to look for a scapegoat and use it to trample and humiliate him. She crushed his neck using her shoes and she stomped on him for fun. He cried and begged for mercy but none was shown to him for some time.